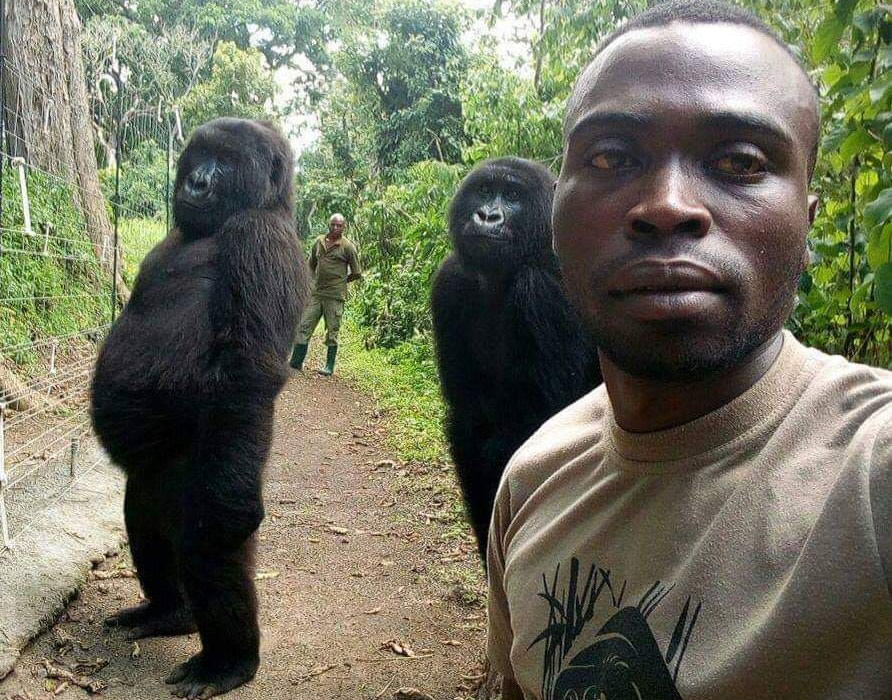 In what he called just another day at the office, Mathieu Shamavu, an anti-poaching park ranger at Virunga National Park in the Democratic Republic of Congo, can be seen posing for selfies with several gorillas along with his colleague, Patrick. Both gorillas which can be seen in the selfies posted on Facebook are said to be orphaned females and have lived at the Senkwekwe Centre for Gorilla Orphans in the DRC since they were young.

The selfie with the two female grilled named Ndakazi and Ndeze went viral with some asking whether it is real. To that effect, Virunga National Park issued a statement confirming its authenticity.

“Those gorilla gals are always acting cheeky so this was the perfect shot of their true personalities! Also, it’s no surprise to see these girls on their two feet either—most primates are comfortable walking upright (bipedalism) for short bursts of time.
Guys, if you shared our gorilla selfie post, please share our Earth Day posts as well! Conserving Virunga’s amazing wildlife is a constant challenge for the Park and our work wouldn’t be possible without your support, ” reads the statement by Virunga National Park.

Although gorillas are wild animals and as such humans are generally not advised to approach them, these two gorillas are said to be friendly with the rangers and enjoyed mimicking them, including standing upright and being comfortable with selfies.

The gorillas continue to be home in an enclosed sanctuary for orphans to which they have lived since infancy.

“The caretakers at Senkwekwe take great care to not put the health of the gorillas in danger. These are exceptional circumstances in which the photo was taken. It is never permitted to approach a gorilla in the wild,” concluded the statement by Virunga National Park.

Do You Know the Goliath Beetle Larvae?