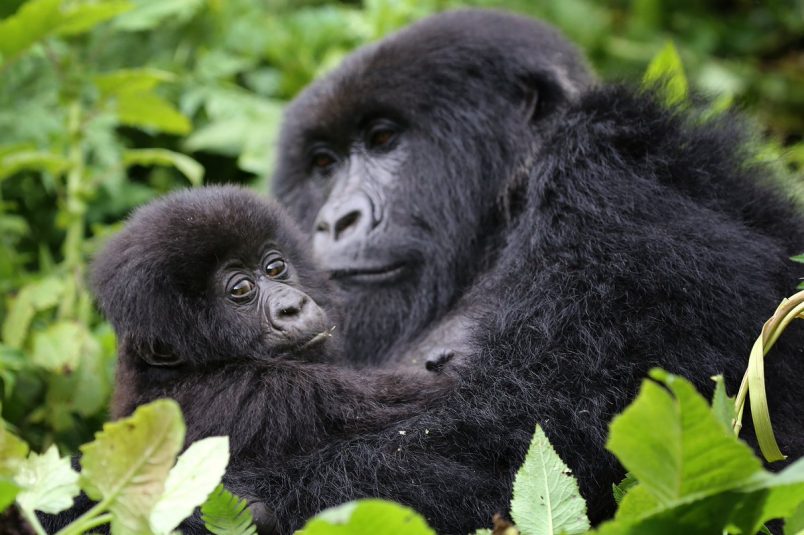 When walking through thickets of bamboo in Rwanda’s Volcanoes National Park, pulling you up a steep lava slope, toehold to toehold. The next, you turn a corner Seated perhaps 30 feet away is one of the roughly 900 mountain gorillas remaining on earth, a saggy-breasted female, and soon you see that she is cradling an infant in her lap or  wraps one arm around the older one while scratching her own ear with an extended index finger. This is something that you should experience on a safari in Rwanda, the land of a thousand hills.

Soon two siblings tumble out of the brush, abruptly disrupting the maternal one-on-one time. As the imps wrestle and roll, the mother flops on her back in surrender.

While observing so much of African wildlife warthogs, elephants, giraffes. With the mountain gorillas of Rwanda, which share 98 percent of our DNA, we are looking into a mirror, and they are looking impassively back.

Thirty-five years ago, the Virunga population had been thinned by poaching, disease and habitat loss to an extremely endangered. Conservation efforts have brought the count gradually back, with some belonging to the mountainsides of Volcanoes National Park.

Human access to the 62-square-mile park is severely restricted, with each group to be visited by 8 people per day. Groups are allowed to spend one tightly monitored hour with one of the families.

The cost of a permit for foreign visitors was increased to 1500. Nonetheless, the number of gorilla visitors to the park has increased and they have become central to this country’s ambitions to build a high-end tourism industry as it recovers from the unimaginable genocide of 1994.

The park’s trackers, armed with radios and just-in-case rifles, maintain a daylong vigil on the gorilla families, making it rare that guides do not find them.

The trekkers gather at 7 a.m. at the park headquarters to be grouped according to the difficulty of their hikes. The walk, considered moderately strenuous, take you across a sloped field of Irish potatoes in lavender bloom and then up a steep vertical through the forest.

He also offer basic rules of the road: Stay at least 22 feet away and keep voices low. No camera flashes. Avoid sustained eye contact or finger pointing. If a gorilla moves toward you, step calmly out of the way. If one charges, follow the guide’s instruction to drop to the ground in submission. Don’t freak out if the silverback beats his leathery chest. He’s just showing off, or perhaps warming himself.

Conservation in the park has become a national priority. Visitors must buy separate permits not only to see the gorillas but also to hike the volcanoes or explore caves. Much of the revenue is dedicated to fighting poaching.  Some people trek on consecutive days in order to observe different families.

Planning a Road Trip Vacation with Kids in Uganda